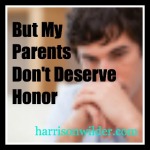 Check out this story from the Book of Genesis. Noah’s son, Ham, finds his father naked and drunk in his tent. Ham dishonored his father by telling his brothers, so that they could all make fun of Noah together. Ham’s brothers chose to honor their father and covered his body. They went so far as to make sure that they didn’t even see him, walking backwards with a blanket toward him.[1] Clearly, this was not Noah’s shining moment. And while his actions that day were not worthy of honor, two of his sons purposed in their hearts to honor their father anyway. They even covered up their father’s moment of weakness and their eyes so they wouldn’t see it.

Scripture encourages you to value your parents, setting them up to be influences in your life, whether they deserve it or not! Seems crazy, right? But, God knows what He’s doing. He knows parents and teachers won’t be perfect, but He wants them valued anyway. With children of my own, I’m beginning to see how important this will be for their future. When I mess up, I’ll need them to be able to overlook it and still look to me for wisdom and guidance along the way. If they don’t, they’ll miss out on the good stuff I actually do have to offer them.

1.)   Honor is For Minors: The commandment to honor does not expire with age. Fortunately, neither do the benefits. In fact, they grow richer as you grow older. You can initiate The Honor Cycle at any age by choosing to put value on other people.

2.)   Honor is Earned: You don’t have to wait for a perfect person to earn your honor. Parents can be valued simply for being your parents, with no conditions. Withholding honor, even for legitimate concerns, only isolates you from the blessing that practicing honor brings.

3.)   Honor is an Action: This is an important distinction. Honor is not an action. Honor is a decision of the heart. It will produce action, but at its core honor is simply choosing that someone else is valuable.

You and I aren’t perfect. Do we ever need people to overlook our failures and value us anyway?

Imagine a river with no banks.  The water would spread out all over the place, expending all of its energy in every direction until it was completely spent and worthless.  Living our lives outside of honoring relationships with previous generations sets us up for ineffectiveness and instability, but the guidance of fathers and mothers focuses our efforts and channels our energies into a force to be reckoned with.

What often looks like a parent boxing a child into a set of parameters or limiting their potential is really providing the stability necessary for real growth and effectiveness in the life of the child.

How have you seen older people channel your passion and energy?

Sometimes parents seem so overbearing that you feel you hardly have room to breath with them in the room, much less have a decent relationship.  The intentional practice of honor can actually help in these situations!

Although my friend Debbie grew up pretty privileged, her transition into young adulthood was not easy.  Her mother was plagued with an unrealistic fear that Debbie would never find a spouse.  This fear drove Debbie’s mom to control every decision Debbie made from 18-years-old on from a warped point of view.  Her mother used emotional pressure to press Debbie about her choice in college, what kind of car she drove, how she did her hair, her weight, her clothing, her friends, even her spiritual beliefs.  When Debbie resisted her, her mother began to put pressure on her to come back home where it would be easier to make sure she was positioned to marry well.

Perhaps you can relate to Debbie’s experience!  How do you turn a situation like this around?  Here’s how Debbie handled it:

Debbie decided not to move back home, despite her mother’s wishes.  She recognized that she could not allow her mother’s fear to control her decision and that she had to take responsibility for her choice about where to live.  She took the time, though, to travel home and discuss the choice with her parents.  In fact, she dedicated a summer to travel with her parents, making sure they were a part of the decision and carefully listening to their input.  The decision was hard on her mom, but the relationship is intact and her mother knows that Debbie cherishes and appreciates her perspective.

Honor doesn’t always result in obedience.  In cases like this, I try to lean heavily on the Biblical meaning of honor: “to put value on” or “to make weighty”.  The input of someone I desire to honor, if I do it right, is weighed heavily in decision-making.  I seek it out; and take effort to really understand it; it’s respectfully considered, dialogued about and gratefully accepted or gracefully set aside.  Just like for Debbie, this process takes time and commitment to the relationship, but will usually result in parents being honored and feeling respected, even if their suggestion is not implemented.

And here’s another benefit.  When parents feel like they are being honored, they are likely to become less controlling.  If you will take the time to work through the decisions you’re making patiently with them, seeking and considering their point of view, they will begin to trust you more and start affirming the path that you decide to take.

What about you?  How do you handle making decisions that your parents don’t agree with?